From Nuts to Nuttier and Back Again 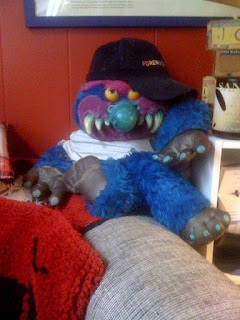 I’ve just made my book project transition–finishing one manuscript and panicking until I could get going on the next one.  If you’re a writer, you’ll understand this phase.  If you’re not, you’ll think that I am just plain nuts.  And others are thinking: “Nutty writer?  Isn’t that an oxymoron?”

I won’t argue with you.  I can’t–not when I look around my office and spot Harley the Pet Monster sporting a Forensic Files cap and a Hulk Hogan t-shirt sitting on the air of my easy chair.  It once belonged to my daughter and went everywhere we went–including church and the grocery store.  Now, he watches over me.

On Monday, May 3, I finished TWISTED REASON, the fourth book in the Lucinda Pierce mystery series, and sent it in to my editor.  When I pressed that “send” button, I was very pleased with what I’d written.  I thought it was my best fiction ever.  Within twenty-fours, I was convinced that the same manuscript was a pile of unadulterated crap.  I spent days bouncing back and forth between these two extremes until I heard from my agent this past Tuesday.  And she liked it.

Happy dance commenced instantly.  When you read someone’s opinion of your book and it contains words like “compelling,” “solid,” and “satisfying,” life is good.  I haven’t heard from my editor yet and I’m a bit anxious about hearing her opinion, but I’m resting a little easier after getting some positive feedback.

Now, I’ve switched from writing fiction to writing another true crime book–my eleventh, which I must admit I find hard to believe.  This one is about Raynella Dossett Leath, a woman with two deceased husbands who lived in the Knoxville, Tennessee area.

When her second husband, David Leath (above left), died, Raynella claimed he committed suicide.  However, a forensic examination of the evidence found that three bullets were fired from the gun–and the second one was instantly fatal.  David Leath’s death was not a suicide and his wife was charged with his murder.  She was convicted in January.

The charges in the death of her second husband raised questions about the demise of her first spouse, Ed Dossett (above right), the Knox County Prosecutor.  His death was caused by a cattle stampede.  A fresh look at the evidence created doubts about that conclusion.  Ed Dossett had so much morphine in his system, there’s no way he could have walked out to the cattle yard unassisted.  Investigators concluded that someone had to have taken Ed out there and put him in harm’s way.  Raynella was charged with his murder.  At this point, no date has been set for her trial in that case.

Now, I’m doing interviews, looking for anyone who knew Raynella, Ed Dossett or David Leath.  If you have a connection to any of those three people, I’d love to talk to you.  Just send an email to diane@dianefanning.com