A Mother Waits, A Mother Dies 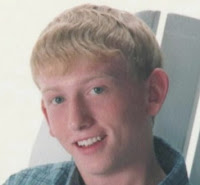 I was deeply saddened to learn of the death of Rebecca Ann “Becky” Klino on Valentine’s Day.  Becky was the mother of Branson Perry. (right)

Branson was related to Bobbi Jo Stinnett and both lived in the small farming community of Skidmore.  I learned about Branson when I wrote about Bobbie Jo’s gruesome murder on December 16, 2004.  Lisa Montgomery killed Bobbie Jo to remove the baby from her body and claim it as her own.

Bobbie Jo’s death was dreadful and tragic, but her mother, at least, could bury her daughter and find justice in the courtroom with Montgomery’s conviction and death sentence.  Branson’s mother, Becky, on the other hand, still waits.  Branson, at the age of 21, disappeared in April 2001 under suspicious circumstances.

Law enforcement, at one point, targeted Jack Wayne Rogers as a possible suspect.  His chatroom discussion about a torture murder seemed to indicate his victim was Branson Perry.  No additional evidence linking him to that crime beyond what Rogers posted on the internet ever surfaced.  The investigation turned their focus to Skidmore itself–population 332–a town whose violent history began with the crimes of Ken McElroy and never seem to end.

For nearly a decade, Becky waited for answers and for justice.
Now, she is gone.  May she rest in peace.

Baby Be Mine, the book about the death of Bobbie Jo Stinnett, recounts the violent history of the rural area in and around Skidmore.