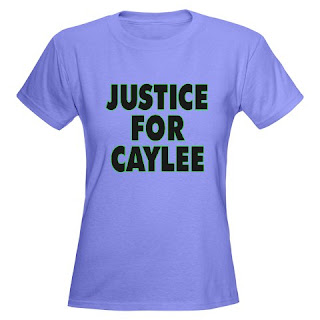 George and Cindy Anthony have sent out cease and desist orders to anyone using the murder case against their daughter Casey to sell products relating to their murdered granddaughter Caylee.  On top of that, they are trademarking Caylee’s images and the phrase “Justice for Caylee.”  If I knew nothing else about the Anthony family, I believe I would find this action understandable.  But I do, we all do.

Of course, they would trademark their granddaughter’s images–they own them.  As George and Cindy proved when they sold those photographs and videos for $200,000 to the highest bidder.  It’s not as if they want no one making money from the death of their granddaughter–it is simply that they want to make ALL the money.

One of their cease and desist letters went to CafePress who offer a tee-shirt bearing the phrase “Justice for Caylee.”  I cannot quite understand why they would oppose that product.  After all, don’t they want justice for their granddaughter?
Quite frankly, if my granddaughter had been murdered, I would love to see thousands of people wearing a tee-shirt like that proclaiming their support for a just cause.   It would warm my heart knowing that so many people cared.

And what of the other Caylees?  I did a little digging and found that there is only one individual named Caylee Anthony and that is their granddaughter.  But there are as many as 1557 Caylees in the United States.  What if something happened to one of them?  Would their families be unable to cry out for justice for their Caylee if George and Cindy succeed in getting this trademark?

I would not be outraged by these legal maneuverings of the Anthonys if I felt that it was the product of their love and protective instincts toward their granddaughter.  But I cannot believe that because of their track record and am appalled that they would attack the very people who are indicating support for the slain little girl.

Under the guidance of their new attorney Mark Lippman, they have also filed suit against an honorable man, Brad Conway, and now this attack on others.  How long will it be before they turn on Mark Lippman, too?