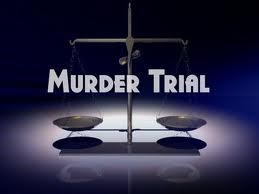 We all expect drama in the courtroom when the actual trial started for Casey Anthony.  When it struck on the last day of jury selection, it took us all by surprise.  Or did it?  We’ve come to expect the unexpected with this case from Casey Anthony’s first lie.

But on Friday, Casey didn’t stir things up.  Nor did her drama-prone attorney Jose Baez.  While a prospective juror was enduring voir dire, a total stranger, Elizabeth Ann Rodgers, shouted out: “She killed somebody, anyway.”

The 29 year old woman was hustled out of the court by deputies.  The potential juror on the stand was escorted out, too.  The defense insisted that the woman being questioned should be striken from the jury pool because she had been tainted by Rodgers behaviour.  The state insisted she should tell them first if the event impacted her.  The judge called for a five minute recess.

Rodgers was brought in to face the judge after the recess.  She was a mess, sobbing to the point that she could barely speak.  She begged for forgiveness and piled on the excuses.  She was bi-polar, she said, ADHD, a PTSD sufferer and made daily visits to the methadone clinic.  She said she was in the courthouse to attend domestic court over a situation with her boyfriend.  Could it get much worse?  And with a life that complicated why did she feel the need to heap on more problems?

Judge Belvin Perry seemed to feel her pain.  But no matter how much empathy/sympathy he might have had for her, no matter how much he believed her story, he could not simply let her walk away from the incident.  If he had, he would have encouraged repeat performances from others.  And, odds are, many would have recited the same litany of woe that Rodgers uttered.  He sentenced her to two days in jail, noting that the punishment was light because of her mental health issues. Considering the craziness is already cropping up in the preliminaries, what will the next six to eight weeks be like?  No matter how well the judge controls the courtrol the courtroom, there’s not a thing he can do about the spontaneous actions of the mentally ill, the attention seekers or those who, for one reason or another, want to complicate the course of justice.

The curtains rise on the opening statements on Tuesday, May 24, at 9 am Eastern with a jury of twelves and five alternates.  Save us from sidebars, spare us from histrionics and bring us justice for Caylee Marie Anthony.